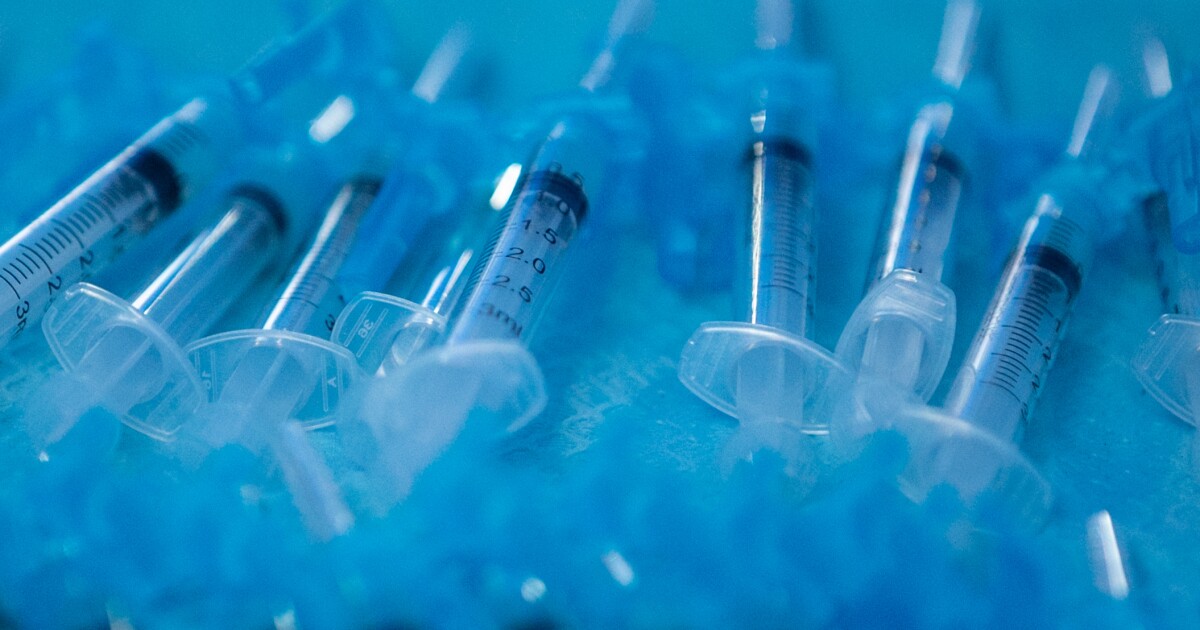 Striking inequities are emerging in the COVID-19 vaccine rollout, with residents of wealthy areas receiving far more vaccinations than those in poorer neighborhoods, data show.

Los Angeles County’s wealthiest and more predominantly white cities have a far greater percentage of residents vaccinated for COVID-19 than its poorest regions, home to large Black and Latino populations.

“The findings clearly indicate very significant inequities in the distribution of vaccine to date,” said Dr. Paul Simon, chief science officer for the Los Angeles County Department of Public Health. “These inequities are unjust and unacceptable and demand renewed efforts to address them.”

A Times analysis found that areas hardest hit by the pandemic have the lowest vaccination rates. In South L.A., only 1 out of 24 people are vaccinated — a low rate for L.A. County — while 1 in 6 coronavirus tests come back positive.

Simon said one of the biggest barriers to vaccinations has been the appointment registration process.

“The websites have been flooded with folks trying to get an appointment. And so those people who have the luxury of time can spend, literally in some cases, hours, I’m sad to say, working to try to get an appointment,” Simon said. Many seniors have relied on their children, nieces, nephews or other friends who are more comfortable using the internet to help get them an appointment.

In addition, the use of so-called mega-POD (point of distribution) sites in the county — such as the Forum and Pomona Fairplex super sites — has been criticized. They’re off-putting for those trying to avoid large crowds, critics say, and the demographic served often doesn’t reflect the county’s poorer residents.

Simon said the strategy of using massive sites was done to dispense vaccinations quickly and has been successful in that regard. “We’re using more than 90% of our supply within four days of receiving it,” he said. “But those big mega-PODs don’t necessarily work so well for these underserved communities.”

Distributing the vaccine is considered the center of efforts to finally bring COVID-19 under control. But demand has far outstripped the limited supply.

Los Angeles County recorded its 20,000th death from COVID-19 on Tuesday, a tragic milestone that came as California’s cumulative death toll neared 50,000 and as the national death toll passed 500,000 Monday.

But those tallies come amid a dramatically improving picture. Daily coronavirus case counts in Los Angeles County are reaching lows not seen since early November, during the first few weeks of the autumn-and-winter surge. L.A. County recorded an average of 2,000 cases a day for the seven-day period that ended Tuesday, down 87% from early January, when there were more than 15,000 new cases a day.

L.A. County recorded about 120 deaths a day on average over the past week, half as much as during the peak in early January, when 241 deaths a day were recorded.

Black and Latino communities have been hit disproportionately hard by COVID-19, and experts say it’s essential the vaccine get distributed there as quickly as possible.

Overall, neighborhoods around L.A. County with the lowest vaccination rates were South L.A., East L.A., several regions of the San Gabriel Valley, the eastern San Fernando Valley, the Antelope Valley and several areas near the ports of Los Angeles and Long Beach.

There is also a gender imbalance among those who have been vaccinated: 59% are female, while 41% are male.

L.A. County officials also calculated by race and ethnic group the percentage of seniors who had received at least one dose of vaccine: 42.5% of people 65 and older. 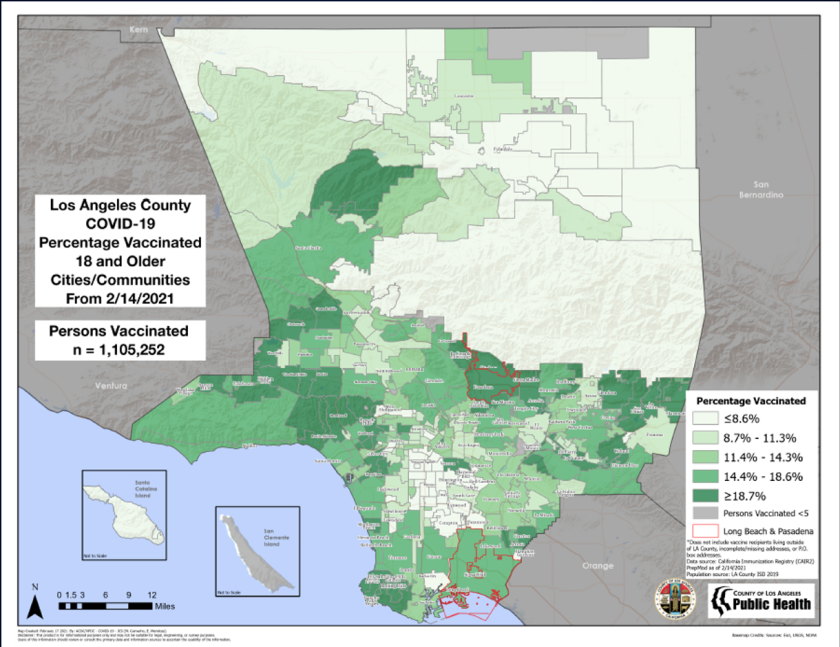 Areas in L.A. County, shaded in the darkest green, have the highest rate of vaccinations — and are generally in wealthier areas with larger proportions of white residents.

Trying to fix the problems

Strategies that officials have proposed to get more vaccine to members of underserved communities include reserving appointment slots for residents of those areas; expanding mobile vaccination units to serve seniors and others with limited mobility; dispatching community health workers to help residents schedule appointments; and expanding transportation services for those in need.

Authorities also are sending more vaccines to healthcare providers in underserved communities, such as clinics and pharmacies.

Officials are allocating an additional 6,000 to 7,000 vaccine doses for residents of South L.A. and 1,000 to 2,000 in the Antelope Valley, Simon said. New vaccination sites will be prioritized in areas with the lowest vaccination rates.

L.A. City Councilman Marqueece Harris-Dawson, who represents South L.A., has been critical of how vaccinations have been distributed. At a City Council meeting in January, he expressed concern about the initial government strategy of routing vaccines to large sites such as the Forum in Inglewood. He said his constituents were “not going to anyplace with big crowds of people” and criticized the demographic makeup of those receiving shots at the venue as not representative of the neighboring community, an observation confirmed by others, including Simon.

Harris-Dawson and others have encouraged the use of mobile vaccine clinics and the practice of routing vaccines to clinics that have a trusted reputation in the community.

Although officials also plan to step up efforts to combat misinformation about the safety of the vaccines, which data have shown to be very safe, Simon said he believed the larger problem right now was lack of access to the vaccine. There are many more Black seniors who desperately want to get the vaccine but have so far been unsuccessful at getting appointments, Simon said.