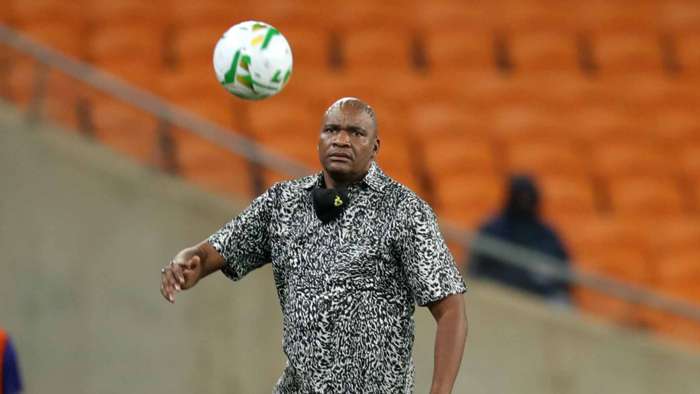 Head coach of South Africa Molefi Ntseki is confident about his side chances of qualifying to the 2021 Africa Cup of Nations to be hosted by Cameroon next year.

The Bafana Bafana qualification to the AFCON has delayed after their 1-1 stalemate against Ghana at the FNB stadium last Thursday.

The Black Stars sealed qualification with the draw which means Sudan and South Africa will have to battle for the one slot left in Group C.

South Africa face Sudan on Sunday to decide their faith but will need a win or draw to book a place at the AFCON.

Speaking ahead of the much-anticipated game, the gaffer noted the group is still open and is of the view Sudan will fancy their chances of winning and qualifying on home turf.

But according to him they are capable of doing well and qualifying at the expense of Sudan.

“They’ve got the points and currently we have South Africa at 10‚ Sudan at nine and Ghana at 10. So I think the group is still very much open. And Sudan playing at home will always fancy their chances of winning and qualifying‚” Ntseki said.

“But I think from our assessment and analysis of Sudan and the players who we have in camp we are capable of doing well and qualifying in Sudan.

“We are aware that Sudan won‚ and we have the clips of how they won the game.

“And the expectation was for the four teams to play on the same day‚ at the same time‚ but we were very surprised to be told that Sudan played their game on Wednesday. And we are still to face the same situation‚ like what happened in the first leg.

“In the first leg they played on the Wednesday against Sao Tome‚ and flew into South Africa that night. We had to play Ghana in Ghana on Thursday‚ drive through the night to the airport‚ fly to South Africa and arrive in the evening on Friday‚ one training session [on the Saturday] to prepare and then play Sudan on the Sunday.

“So it’s a repeat. But being a repeat it has made us much stronger‚ because this is a situation that we can’t do anything about. And the team is looking forward to going to Sudan and doing everybody proud.”