Battle of the Clouds

Interested in finding the private cloud package that will work for you?

In the open source private cloud space, there are several options, such as ownCloud, Nextcloud, Seafile, Syncthing and Pydio as well as smaller players such as SparkleShare.

To see what’s happening in this market, let’s take a brief look at this Google Trends graph of interest in the top four packages over the past 5 years:

Shows pretty clearly that ownCloud and Nextcloud dwarf the competition, and it also seems pretty clear that since its inception, interest in Nextcloud has been growing fast and today has actually more Google searches than ownCloud.

Not a surprise then that people are asking every day for details about Nextcloud vs ownCloud. What’s the difference?

This is indeed an excellent question and below we’re going to detail exactly what differences exist. Yes, we are entering now the Battle of the Clouds!

We will examine four areas:

The last section Product is certainly the largest section and may be of most interest to many, so if you want, just click on the word Product to jump straight there.

ownCloud was launched in January 2010 by Frank Karlitschek and the first beta release came out in March 2010. In 2012 ownCloud Inc. was formed to serve the needs of the community of users of ownCloud. After the Nextcloud fork, ownCloud Inc. was shut down and today ownCloud is still managed by ownCloud GmbH.

Regarding why Karlitschek left ownCloud, he himself expresses most clearly in his blog post big changes: I am leaving ownCloud, Inc. today. How this affected the community and for other responses to the fork you can read up in various other places like ownCloud’s blog, The New Stack, TechRepublic, CIO, ITWire and others.

The ownCloud project is split into two components, the open source Standard Edition and the Enterprise Edition, which is not open source, but the code can be downloaded without obfuscation. The Standard Edition is represented by owncloud.org and managed by ownCloud GmbH and the list of contributors is online.

The Enterprise Edition is represented by owncloud.com, has more features, and is also managed by ownCloud GmBH. They also have an exclusive partnership for North American clients with a company called XTIVIA and there is an XTIVIA page on the ownCloud site describing this relationship. ownCloud also has an official Meet the Team page.

Nextcloud has one open source edition and is represented online by nextcloud.com and managed by Nextcloud GmbH and the list of contributors is online and boasts that over 1000 people have contributed to Nextcloud.

ownCloud Enterprise Edition is not open source and is licensed under the ownCloud Commercial License.

The latest release of ownCloud Standard Edition released May 2017 is version 10 or ownCloud X, as they call it. The rest of our review is only regarding the Standard Edition, which is open source. The ownCloud Enterprise Edition does have more features not listed below.

Below we have these sub-sections in this section:

Here’s the first one: 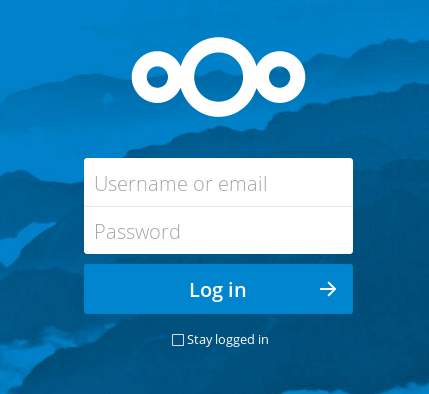 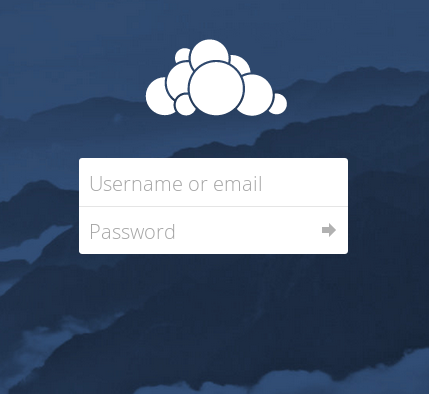 Here we show you the top left corner of the initial screen, known as the “Files” page. This is essentially the Home page of a private cloud: 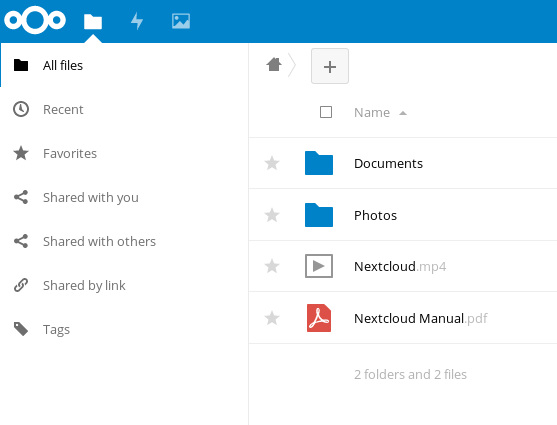 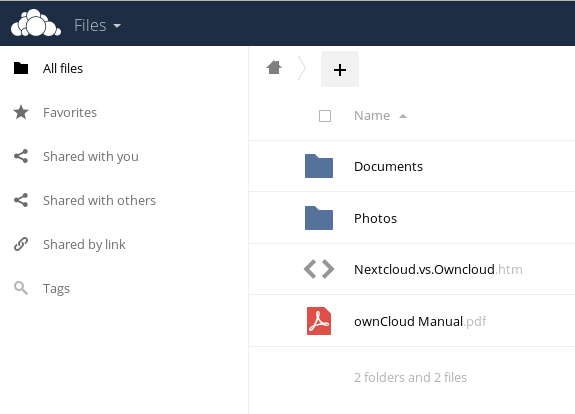 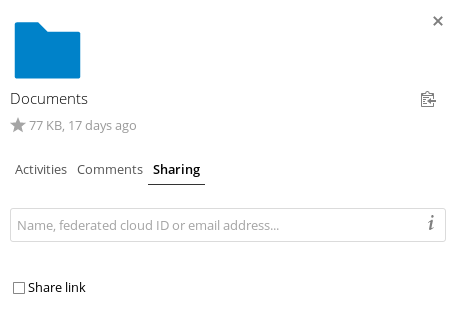 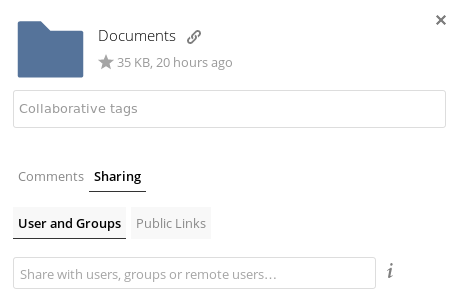 On our installation with several apps installed, Nextcloud shows each as a small icon, accessible directly from the main menu top bar. If you install a lot of apps in Nextcloud, however, you also must use a dropdown menu feature to see the rest: 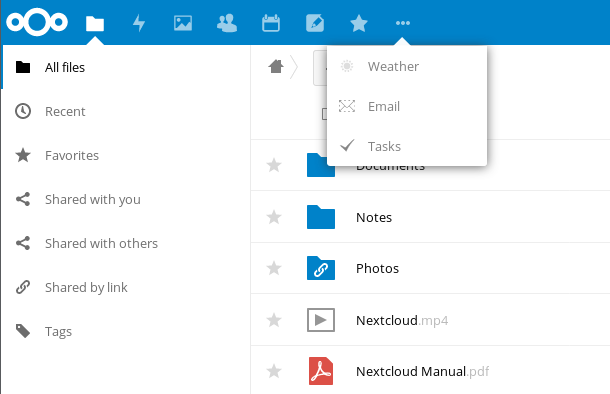 In ownCloud you must first click on the dropdown menu, but then the app icons are larger and have text also: 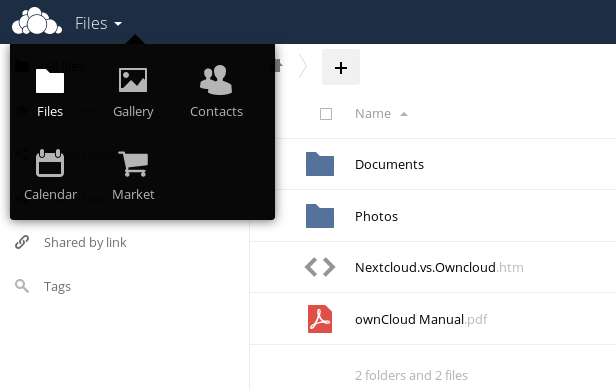 Here is the initial apps page of Nextcloud:

If you select a category on the left, however, you do get a nicer view of available apps: 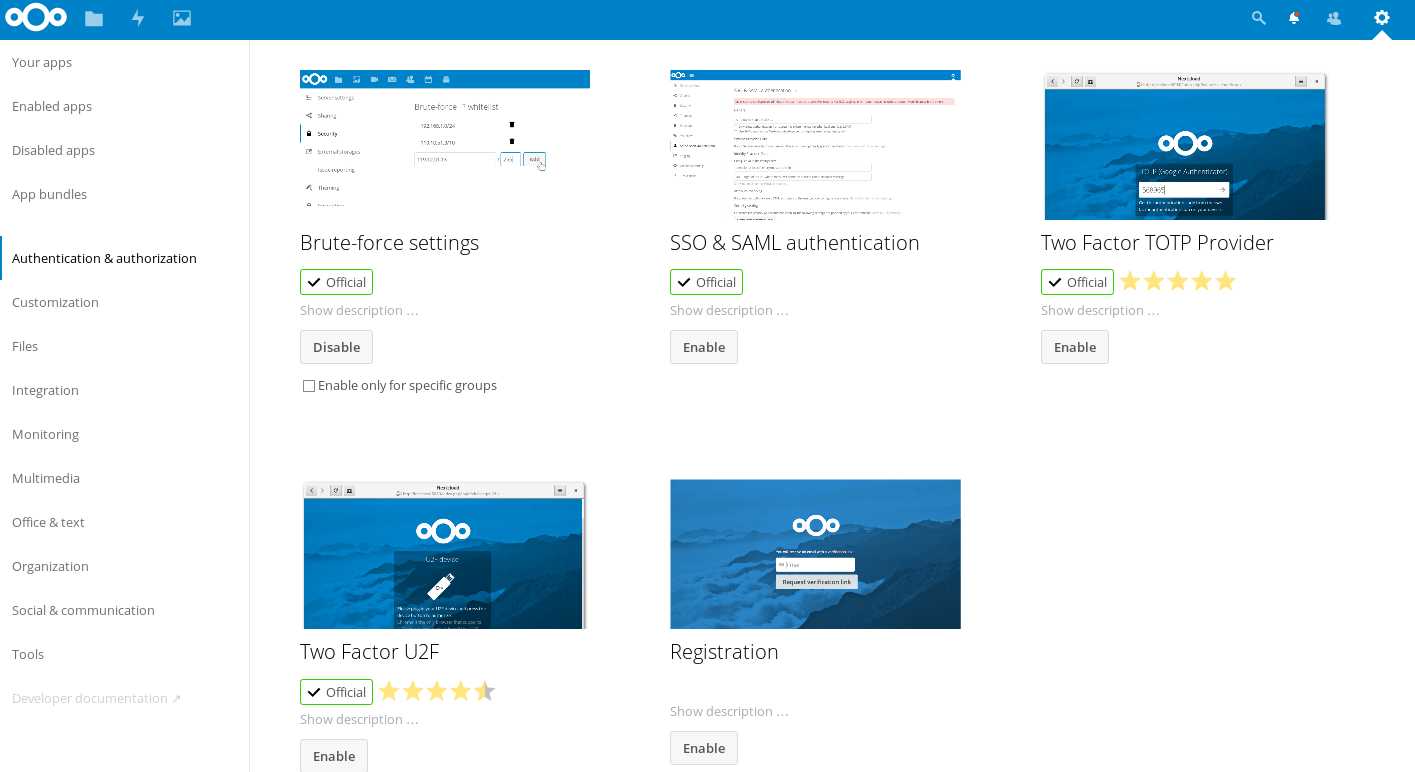 Here is the initial Marketplace page of ownCloud: 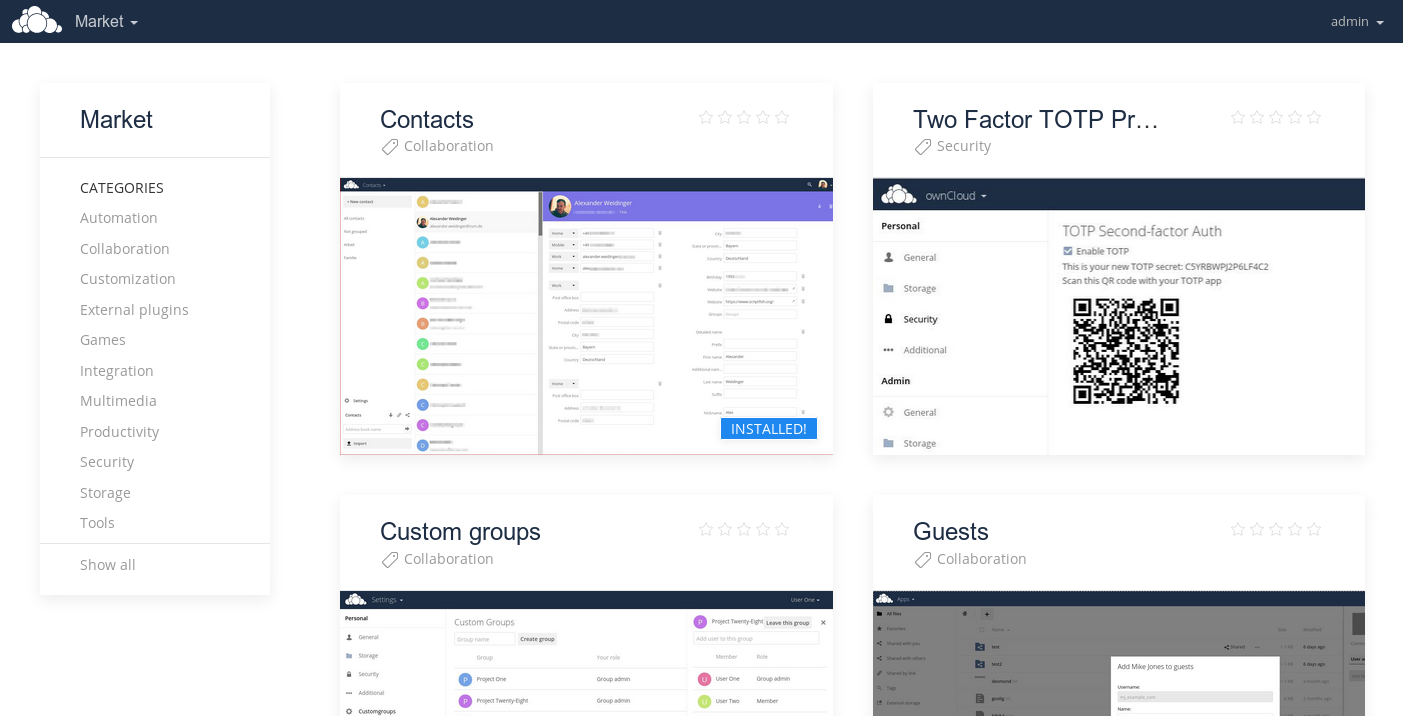 Pricing for Nextcloud and ownCloud are free. That means they cost precisely zero dollars and zero cents to use them for as unlimited time, with unlimited data and unlimited users. There is no fee whatsover to download and use either package — they are both Open Source and completely free.

The marketing experts at FileCloud will try to convince you that each of these packages costs thousands of dollars per year, more in fact than their own commercial package. They make a convincing case that their product is less expensive. What they fail to mention, however, is that the fees they mention for Nextcloud and ownCloud are not software fees, they are optional support subscriptions.

The base price for both is just ZERO. You of course need hosting and you can see our own Nextcloud hosting page for information about our hosting services, or you can host it yourself at home.

Both packages are built in PHP and support SQLite or MySQL/MariaDB. The installation procedure is virtually the same for both. For details, see our own How to Install Nextcloud page.

Regarding the code base, both are public of course and so you can see exactly what progress is being made. If we compare the GitHub Nextcloud “commit activity” graph and the ownCloud “commit activity” graph, you can see that Nextcloud has around twice as many commits as ownCloud does. A representative from ownCloud commented to us offline that their approach is to make fewer, but larger commits, but if we examine the Nextcloud “code frequency” graph vs the ownCloud “code frequency” graph it’s quite clear that since the split in 2016, the Nextcloud team has made far more development with the codebase than ownCloud.

They also have several more releases over the past year than ownCloud. Given that both packages started with the exact same code base when Nextcloud forked, this gives one an idea of where the action is.

The Nextcloud team has invested a lot in improving security for their product, such as better password handling, brute force protection, rate limiting, integration with various enterprise authentication methods, CSP and more.

Nextcloud, however, features an up to $5,000 Bug Bounty Program at HackerOne, a vulnerability coordination and bug bounty platform. You can see more on the Nextcloud page there.

ownCloud also has a page there, but as of Dec 19, 2018, it is not active and says “ownCloud is taking a break and is not accepting new submissions”. You can see for yourself the ownCloud page there.

ownCloud has a Support page with links to documentation, forums, IRC channel and other venues such as a Google Plus community, plus a mailing list. They then also have premium support for their Enterprise clients.

Nextcloud’s Support page has the same links for their documentation, forums, IRC channel and other venues such as a Google Plus community. They also provide premium support for clients who use their Enterprise support services.

If you prefer video, for Nextcloud there is a Nextcloud GmbH YouTube channel with over 60 videos, the most popular of which has 25,000 views.

For ownCloud there is the ownClouders channel, which, based on the logo used, appears to be focused on the Standard Edition and has over 250 videos and the most popular there has 170,000 views, and then there is the ownCloud channel apparently representing the Enterprise Version (here you see the Enterprise logo) with over 80 videos and the most popular video there has almost 3,000 views.

Both packages have a solid base and a growing set of addon apps, both have support available. Nextcloud, however, has a lot more action, “buzz” and growth. ownCloud does not appear to be dead at all, but the future of open source clouds clearly looks to be with Nextcloud.

If you’re looking for hosting for Nextcloud or for ownCloud, whether in the USA or Europe, we recommend CiviHosting. Let us install and secure your cloud for you: