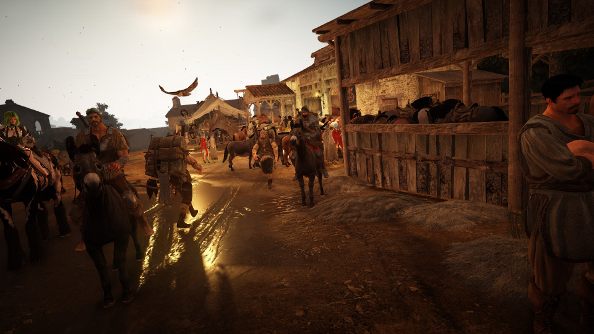 Black Desert Online looks like a flashy action-MMO, all beautiful fantasy vistas and spectacular, over-the-top combat. There’s a big, gorgeous world filled to the brim with monsters waiting to be dispatched with a bit of panache, and a multitude of threadbare quests serving as the impetus for slaughtering loads of goblins and other beasties.

At a glance it’s evocative of fellow action-MMO, Tera, but not long after explaining the nuances of its combat system, the game suddenly shift gears. It becomes a trading simulator. And during the recent beta, I’ve been attempting to turn one dashing, slightly stupid hero into the world’s most savvy merchant. 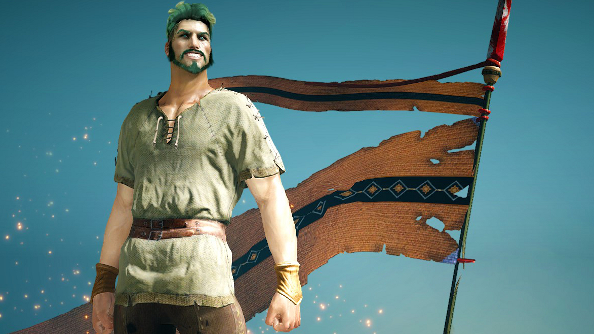 Underneath his absurdly heroic grin and silly hair is the soul of a man who likes to buy low and sell high. A man who maybe knows a good deal on some cheap chickens in the area. A man who most definitely has aspirations of one day riding a mule from town to town, hawking wares.

Black Desert Online kicks off with some awkward tutorial quests and what really amounts to a bunch of loosely connected chores, often doled out by a dark spirit who happily admits that they are busywork. After the the first couple of hours, which is mostly a whirlwind of empowering, kinetic combat and instantly-forgettable quests, the reins get slacker, the pace slows down, and it expects players to find their groove.

There’s none of the racing around quest hubs, grabbing all of the quests, clearing the map and moving onto the next one; the flow that that typifies MMOs. Instead, Black Desert Online rewards lingering in towns, speaking to lots of NPCs and soaking up as much knowledge about an area as possible. 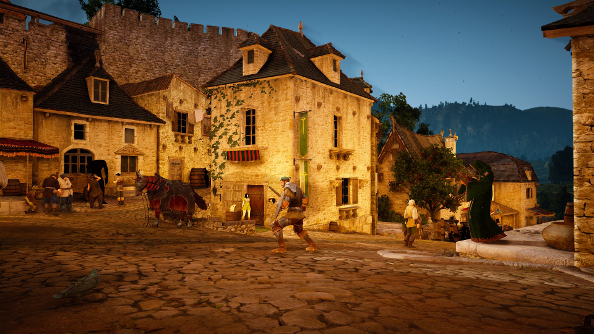 By not blowing through areas, pulled along by the promise of loot and gear, you can unlock new shops and quests. See, NPCs don’t just spill their guts at the sight of a random wanderer. They’re not all waiting for a stranger to solve their myriad problems. No, they’re waiting for someone they vaguely know, who they can have a nice chat to, that’s who they want to go questing for them.

Being a hero, then, involves more than just accepting quests from dozens of NPCs in the space of a couple of minutes; quest-givers need to be buttered up through a mini-game, which requires getting to know lots of other NPCs in the surrounding area first. It’s possible to unlock new shops as well as quests this way, by being the hero who cares. Want to kill even more monsters? You’ve got to shake some hands and kiss some babies first.

I spent so much more time exploring the game’s first region than I normally would in an MMO, talking up a storm and then setting off to meet all the shop owners and quest givers who work on the various farms and mines that orbit the settlement. I wasn’t rushed or compelled to move on in search of more loot or the promise of more experience and new abilities. Absent direction, I was able to find my own little niche in this fantasy world. While chatting to NPCs, I encountered Black Desert Online’s node system, and began my exciting romance with making lots of money through trade. 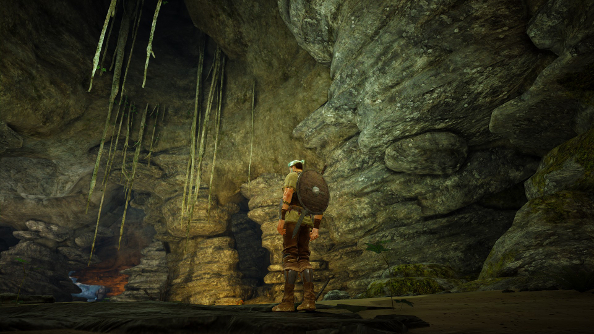 Every town, village, guard post, farm and mine is a node on the MMO’s huge map; part of an interconnected trade network. Investing in nodes allows you work them, through hiring NPCs to farm or mine whatever resources the node provides. Even the small number of nodes I’d discovered through exploration and conversation held the potential to be an excellent foundation for my legacy: a Scrooge McDuck-style vault of dosh.

Setting up a business isn’t quite as easy as being an adventurer, though. There are a lot of steps involved. First, employees are needed. Thankfully, there’s a guy for that, and he was happy to sell me some Goblin and Giant workers for my startup. One strapping, one wiley – I was all set. But I was responsible for these fellas now, which meant that I needed to keep them housed and fed. 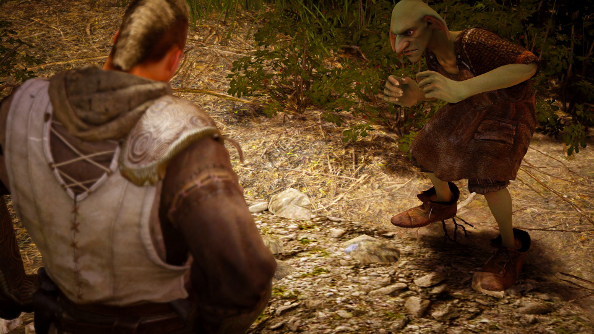 There’s property for sale all over the world, conveniently, though not all buildings are appropriate for every purpose, so I had to shop around. Eventually, though, I found some rooms at the local inn that would keep my workers warm and dry. Thing is, they need to be fed, as well. Specifically on beer. That can be crafted, though, so I bought myself a home, crammed a cooking station inside it, and voilà, I was making beer for my happy new friends. Finally, I expanded my storage capacity by purchasing yet another building. A home for all of the stuff I wanted to sell.

With everything prepared, I invested in my first farm. A potato farm. Everyone loves potatoes; they never go out of style. I knew I’d be a millionaire in no time. After activating the node, I saw my Giant leave town and run off to the farm to do the day’s work. How content I felt. But not too content! More business opportunities awaited.

I’d discovered some copper and iron mines while searching for hidden treasure at the request of a wee kid who wanted to be a pirate, and I thought that the ore market might be where all the high fliers and business titans made their mark. I invested in some underground operations and sent my Goblin to do some hard work. Soon, the resources started to flow into my warehouse. I had wares. I had things to sell. I was a proper trader.

I even got a donkey. 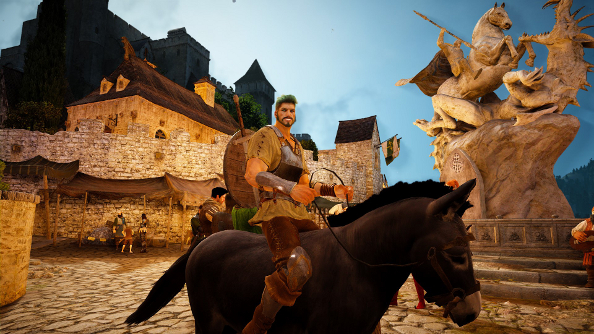 The donkey – his name’s Pancakes – wasn’t just a status symbol, like a flashy sports car. No, he’s another integral member of my team. It’s all well and good to have a warehouse full of stuff, but it doesn’t do anything just sitting there. The goods need to be transported to potential buyers, and there isn’t a spell for that unfortunately. There are, however, plenty of options.

You can carry goods on your back, but that’s slow going and puny humans can’t really transport very much. That’s why mounts are handy. They don’t just get you to your destination; they can hold a much greater weight, depending on the mount in question. Or you could ditch the horse and transport everything by boat. There are even wagons and caravans that expand your carry capacity. For the big spenders, though, there’s an alternative: pay an NPC to do it.

Actually turning a profit requires more than following the maxim of buy low and sell high. How much someone is willing to give you for your goods depends on a number of factors, including the saturation of the market, the needs of the area and how far away the goods were made. The further the better. You also lose a bit of money by selling things to a place that isn’t connected to your node network, inspiring you to invest more and more into the spiderweb. 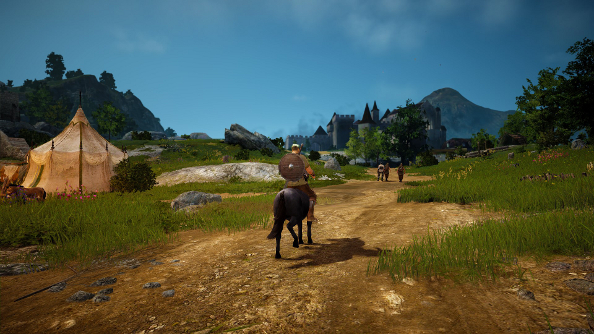 Thus, Pancakes and I travelled all across the land, laden with lovely things for people to buy, unlocking new nodes and hunting for lucrative deals. I forgot all about the monsters. The life of a trader is not one without action, though. Brigands prowl the trade routes, waiting to waylay unsuspecting travellers and make off with some of their possessions. You can tell when a route has a brigand problem, though, making them easy to avoid.

Imagine that! Avoiding a fight in an action-MMO.

It’s worth noting that one can easily eschew the fast-paced world of transporting grain, hiring workers and investing for the much more sedate and relaxing world of chopping monsters up, setting things on fire and murdering people. I personally like to mix it up and hunt Goblins after a big deal. 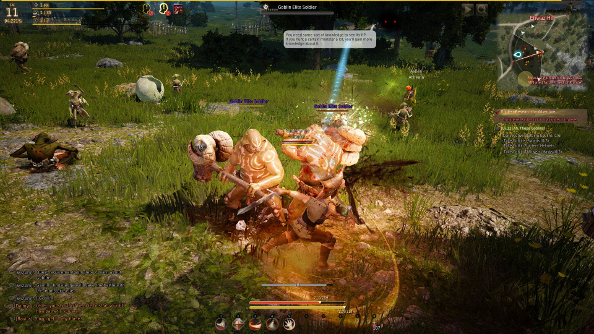 Black Desert Online encourages a slew of activities through its energy and contribution systems. These two resources are used for all manner of things, from gathering crafting materials to purchasing property and renting items, but they do run out. It’s not like Archeage’s horrible labour point system, though. You don’t need to buy more. Energy regenerates quickly, at a point every few minutes, and contribution points can be most easily earned through questing. By expanding your knowledge of the area, by doing quests and by crafting, you can both generate more points and increase the size of the pool.

I’m reminded of EVE Online. The games are very different, sure, but there’s one key similarity: they do away with a lot of the genre’s illusions and Pavlovian manipulation. Black Desert Online is not a race to find more powerful gear or get through dungeons and work your way up to the point where you can raid and get even more gear. Players have more agency, more choice about what to do and where to go, and there’s none of that pressure to keep moving forward.

When I finally rode into the second region, wobbling on the back of Pancakes, I was faced with a mountain of new quests. Kill some bees. Murder some birds. Hit some pumpkins. “Nah,” I thought. “I’ve just spotted a new node.”