Asteroid Mining – A fast way to get rich? 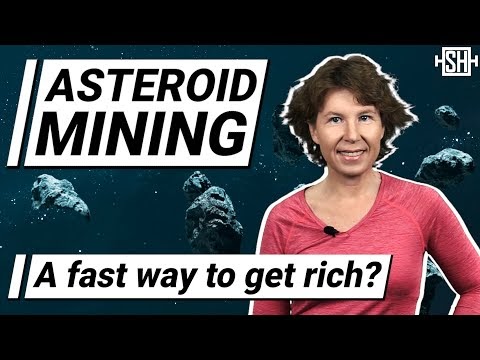 [This is a transcript of the video embedded below.]
Asteroids are the new gold mines. Fly to an asteroid, dig up its minerals, become a billionaire. I used to think this is crazy and will never make financial sense. But after a lot of reading I’m now thinking maybe it will work – by letting bacteria do the digging. How do you dig with bacteria? Is it even legal to mine asteroids? And will it happen in your lifetime? That’s what we’ll talk about today.

Space Agencies like NASA and ESA have found about 25000 asteroids. In 2020 alone, they discovered 3000 new near earth asteroids. About 900 of them have an extension of 1 kilometer or more.

What makes asteroids so interesting for mining is that their chemical composition is often similar to what you find in the core of our planet. Metals from the platinum group are very expensive because they are useful but rare in Earth’s crust. On an asteroid, they can be much easier to dig up. And that’s a straight-forward way to get rich – very, very rich.

The asteroid Psyche, for example, has a diameter of about two-hundred kilometers and astrophysicists estimate it’s about ninety percent metal, mostly iron and nickel. Lindy Elkins-Tanton, NASA’s lead scientist of the Psyche mission, estimated the asteroid is worth about 10 quintillion US dollars. That’s a 1 followed by 19 zeros. Now imagine that thing was made of platinum…

NASA, by the way, is planning a mission to Psyche that’s to be launched in 2022. Not because of the quintillions but because they want to study its composition to learn more about how planetary systems form.

How does one find an asteroid that’s good for mining? Well, first of all it shouldn’t take forever to get there, so you want one that comes reasonably close to earth every once in a while. You also don’t want it to spin too much because that’d make it very hard to land or operate on it. And finally you want one that’s cheap to get to, so that means there’s a small amount of acceleration needed during the flight, a small “Delta V” as it’s called.

How many asteroids are there that fit these demands? The astrophysicist Martin Elvis from Harvard estimated it using an equation that’s now called the Elvis equation. It’s similar to the Drake equation which one uses to estimate the number of extraterrestrial civilizations by multiplying a lot of factors. And like the Drake equation, the Elvis Equation depends a lot on the assumptions that you make.

In any case, Elvis with his Elvis equation estimates that only about 10 of the known asteroids are worth mining. For the other ones, the cost-benefit ratio doesn’t work out, because they’re either too difficult to reach or don’t have enough worth mining or they’re too small. In principle one could also think of catching small asteroids, and bringing them back to earth, but in practice that’s difficult: The small ones are hard to find and track. At least right now this doesn’t work.

So the first two problems with asteroid mining are finding an asteroid and getting there. The next problem is digging. The gravitational pull on these asteroids is so small that one can’t just drill into the ground, that would simply kick the spacecraft off the asteroid.

The maybe most obvious way around this problem is to anchor the digging machine to the asteroid. Another solution that researchers from NASA are pursuing are shovels that dig in two opposite directions simultaneously, so there’s no net force to kick the machine off the asteroid. NASA is also looking into the option that instead of using one large machine, one could use instead a swarm of small robots that coordinate their tasks.

Another smart idea is optical digging. For this one use mirrors and lenses to concentrate sunlight to heat up the surface. This can burn off the surface layer by layer, and the material can then be caught in bags.

And then there is mining with bacteria. Using bacteria for mining is actually not a new idea. It’s called “biomining” and according to some historians the Romans have been doing it 2000 years ago already – though they almost certainly didn’t understand how it works since they didn’t know of bacteria to begin with. But we know today that some bacteria eat and decompose minerals. And during their digestion process, they separate off the metal that you want to extract. So basically, the idea is that you ship the bacteria to your asteroid, let them eat dust, and wait for them to digest.

For one you wouldn’t directly dump the bacteria onto the asteroid, but put them into some kind of gel. Still there are pretty harsh conditions on an asteroid and you need to find the right bacteria for the task. It’s not hopeless. Microbiologists know that some species of bacteria have adapted to temperatures that would easily kill humans. Some bacteria can for example live at temperatures up to one-hundred thirteen degrees Celsius and some at temperatures down to minus twenty-eight Celsius. At low metabolic rates, they’ve been found to survive even at minus fourty degrees. And some species of bacteria survive vacuum as low as 10 to the minus five Pascal, which should allow them to survive in the vicinity of a spacecraft.

What about radiation? Again, bacteria are remarkably resistant. The bacterium Deinococcus radiodurans, for example, can cope with ionizing radiation up to twenty kiloGray. For comparison, in humans, acute radiation poisoning sets in at about zero point seven Gray. The bacteria easily tolerate twenty-thousand times as much!

And while the perfect bacterium for space mining hasn’t yet been found, there’s a lot of research going on in this area. It looks like a really promising idea to me.

But, you may wonder now, is it even legal to mine an asteroid? Probably yes. This kind of question is addressed by the nineteen sixty-seven Outer Space Treaty, which has been signed by one hundred eleven countries including the United States, Russia, and almost all of Europe.

According to that treaty, celestial bodies may not be subject to “national appropriation”. However, the treaty does not directly address the extraction of “space resources”, that is stuff you find on those celestial bodies. Some countries have interpreted this to mean that commercial mining does not amount to national appropriation and is permitted.

For example, since 2015 American citizens have the right to possess and sell space resources. Luxembourg has established a similar legal framework in 2017. And Russia too is about to pass such legislation.

This isn’t the only development in the area. You can now make a university degree in space resources, for example at the Colorado School of Mines, the University of Central Florida, and the University of Luxembourg. And at the same time several space agencies are planning to visit more asteroids. NASA wants to fly not only to Psyche, but also to Bennu, that is expected to get close to Earth in September twenty twenty-three.

The Chinese National Space Administration has proposed a similar mission to retrieve a sample from the asteroid Kamo’oalewa. And there are several other missions on the horizon.

And then there’s the industry interest. Starting about a decade ago, a number of start-ups appeared with the goal of mining asteroids, such as Planetary Resources and Deep Space Industries. These companies attracted some investors when they appeared but since then they have been struggling to attract more money, and they have basically disappeared – they’ve been bought by other companies which are more interested in their assets than in furthering the asteroid mining adventure.

The issue is that asteroid mining is real business, but it’s business in which there’s still tons of research to do: How to identify what asteroid is a good target, how to get to the asteroid, how to dig on it. And let’s not forget that once you’ve managed to do that, you also have to get the stuff back to earth. It’d take billions of up-front investments and decades of time to pay off even in the best case. So, while it’s promising, it looks unlikely to me that private investors will drive the technological development in this area. It will likely remain up to tax funded space agencies to finance this research for some more time.