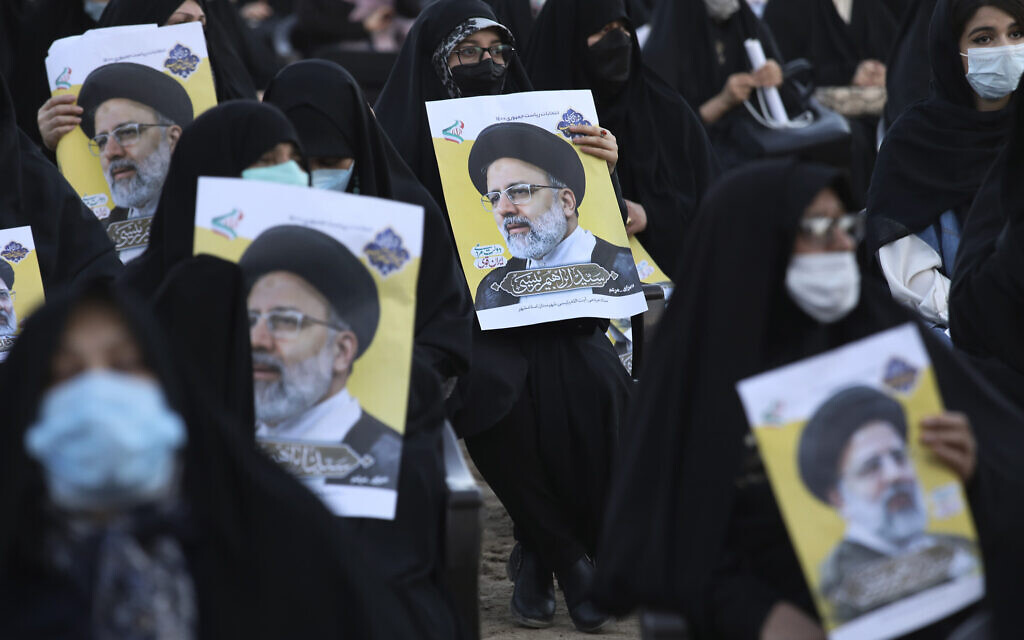 TEHRAN, Iran (AP) — Iran’s presidential contest headed toward a showdown between the country’s hard-line judiciary chief and moderate former Central Bank chief on Wednesday, as two candidates dropped out on the last day of campaigning to clear a path for the challengers.

Mohsen Mehralizadeh, the only reformist candidate in the vote, as well as hard-line contender Alireza Zakani withdrew from the race, state media reported, leaving just five candidates in the field. Such dropouts are common in Iranian presidential elections in order to boost the chances of similar candidates. No campaigning is allowed on Thursday, 24 hours before polls open.

The departure of 64-year-old Mehralizadeh, who served as governor in two Iranian provinces, is aimed at consolidating support for top banker Abdolnasser Hemmati, who has positioned himself as a leading moderate and stand-in for President Hassan Rouhani, who is term-limited from running again.

Also ending his campaign, Zakani, a 55-year-old hard-line lawmaker twice rejected from running for president, threw his support behind Raisi.

“I consider him (Raisi) to be the most qualified,” Zakani was quoted as saying by state TV. Other candidates were expected to follow suit later Wednesday. Over 200 lawmakers in parliament, which is dominated by hard-liners, released a statement urging the rest of the conservative contenders to withdraw and back Raisi’s presidential bid. 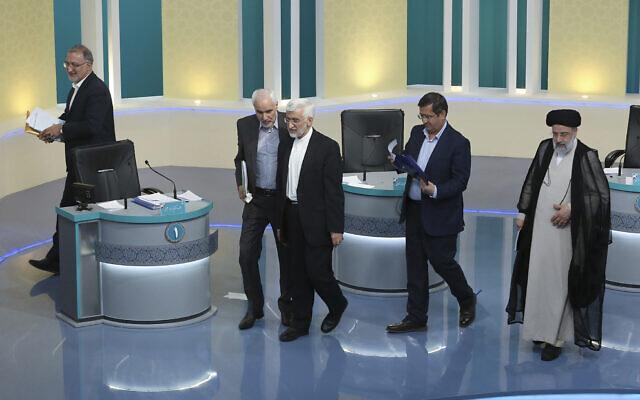 Some candidates, however, doubled down on their campaigning. In a mass text message to citizens, hard-liner Mohsen Rezaei repeated his pledges to expand affordable housing for the country’s poorest, pay monthly salaries to homemakers and provide all Iranians with a monthly $20 stipend.

Mehralizadeh, the pro-reform candidate, had previously served as vice president in charge of physical education under reformist president Mohammad Khatami and as a deputy in the Atomic Energy Organization of Iran, which runs the country’s civilian nuclear program. He came in last place in Iran’s 2005 election, but found himself barred from running in 2015.

Hard-liner Zakani heads the parliament’s research center. As a lawmaker, he became known for his outspoken opposition to Tehran’s 2015 nuclear deal with world powers. Starting in the late 1990s, he served as head of students’ Basij organization, affiliated with the powerful paramilitary Revolutionary Guard.

As the field narrowed on Wednesday and Hemmati sought to rally the pro-reform vote, he announced that he’d select current Foreign Minister Mohammad Javad Zarif to join his administration as either vice president or foreign minister, embracing the top diplomat who was an architect of Tehran’s now-tattered nuclear deal.

“The economic development of Iran is not possible without strong diplomatic engagement abroad,” Hemmati wrote on Twitter to explain his choice of Zarif. “My administration is after the removal of sanctions and use of foreign policy to achieve political development.” 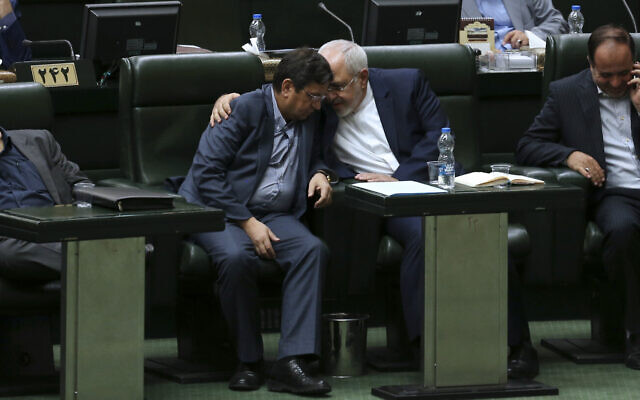 Zarif, among the best-known political figures in the Rouhani administration, has come under fire from the political establishment in recent weeks after the leak of a contentious audiotape in which he offered a blunt appraisal of power struggles in the Islamic Republic.

There was no immediate word from Zarif on Hemmati’s announcement, but the minister has previously indicated a willingness to join the incoming administration.

Within Iran, candidates exist on a political spectrum that broadly includes hard-liners who want to expand Iran’s nuclear program and confront the world, moderates who hold onto the status quo and reformists who want to change the theocracy from within.

Although a range of prominent reformists and key Rouhani allies registered to run for president, Iran’s clerical vetting body allowed just several low-profile candidates, mostly hard-liners, to run against Raisi. Owing in part to the disqualifications as well as the raging coronavirus pandemic, voter apathy runs deep. The state-linked Iranian Student Polling Agency has most recently projected a 42% turnout from the country’s 59 million eligible voters, which would be a historic low amid mounting calls for a boycott. 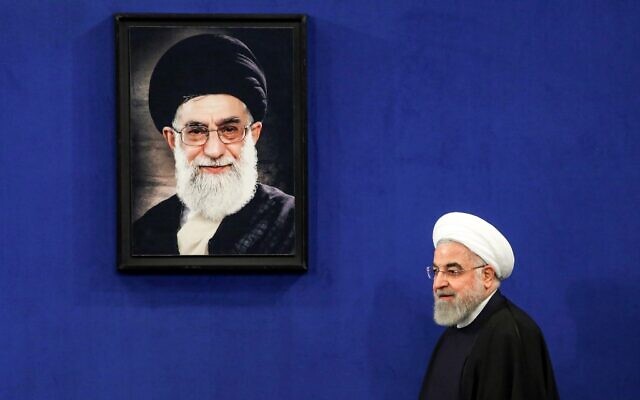 Iranian President Hassan Rouhani walks past a portrait of Supreme Leader Ayatollah Ali Khamenei as he arrives for a news conference in the capital Tehran, on February 16, 2020. (Atta Kenare/AFP)

Rouhani, who had publicly protested the Guardian Council’s rejection of high-profile nominees, pleaded with the Iranian public to vote nonetheless.

“The way of expressing our complaints is not turning our backs on ballot boxes. … Some may say that the situation has become so tough for us. I tell them to cast their votes despite the troubles,” he said. “Going to polling stations in present circumstances … makes us more powerful.”

In video widely shared on social media Wednesday, former reformist president Khatami urges pro-reform Iranians to vote despite their disappointment in the approved candidate list. He accused powerful hard-liners of vaulting Raisi to power at the expense of wider political participation.

“I hope the people make an effort, show up and vote to reverse this plan by a political faction to bring some people to power at any cost,” he said.

Separately, Khatami praised Mehalizadeh for his withdrawal, saying it will “prevent the splitting of (reformist) votes.”

And though Khatami did not endorse any specific candidate, his appeals could help Hemmati attract support from disillusioned reformists.